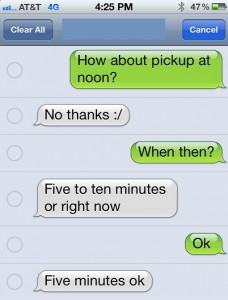 My cousin had a dilemma; her teenage son wasn’t reading his emails or listening to his voice mails on the iPhone she bought for him. So, how was she going to get in touch with him? Believe it or not, SMS (short message service) otherwise known as text message was the answer.

He has a phone with all the bells and whistles a kid would want, but he wasn’t checking the mail or voice mail on this snazzy (and expensive) smart phone.

What did she do? When she sees important emails from the various organizations he’s involved in such as swim team and Boy Scouts, she takes a screen shot of the email and sends it to him via text message.

In my own house, my son communicates with me via text more often than leaving me a voice mail. In fact, the only time he leaves me a voice mail is when he really wants something like more computer time.

He won’t make voice calls at all to his friends. When I asked why, he said it’s just not cool. So does this mean I’m cool?

Oh, and in case you didn’t understand the headline, it says “Can you hear me now? Sorry, you can text me.”